There are many ways to set up a TimePilot CrossOver lock system. Here are two hypothetical examples that use some of the software's features. The first uses just the system's basic features; the second uses more advanced features.

Dr. Jennifer Carlson is a physician who needs to secure her medical practice's file room to comply with federal privacy laws. Besides herself, she wants to give only her office manager access to the room. For extra security, she wants the locks to operate in Storehouse mode, which means they relock about 5 seconds after opening. Dr. Carlson will run the software on the PC in her office.

She purchases a CrossOver X45 lock, a Lock Management Kit and 5 iButtons.

Setting up the lock

Following the instructions in the user manual, Dr. Carlson sets up the lock and uses the software to assign iButtons to herself and to her office manager. She wants to keep things simple, so she gives herself and the manager 24-hour, 7-day-a-week access to the lock. At the same time, she sets the lock to operate in Storehouse mode, which means it will re-lock itself about 5 seconds after it has been opened.

Now that the lock is set up and the iButtons assigned, the maintenance man installs the lock on the file room's door using the drilling template included in the lock package. The work goes quickly, because the lock is a standard size that fits most doors. Any other changes Dr. Carlson needs to make to the lock can be done by making the changes in the software, transmitting them to the Program Key via the Blue Dot iButton Receptor, then taking the Program iButton and touching it to the lock.

Dr. Carlson gives the office manager her iButton and adds her own to her keychain. Setup is complete, and Dr. Carlson's patients' medical files are secure. 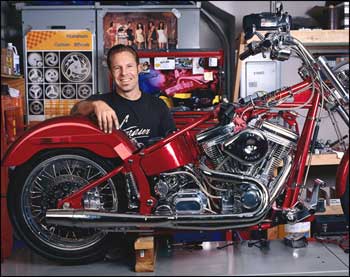 Mike Gallant has purchased two CrossOver X45 locks, a Lock Management Kit and 10 iButtons for his business, a motorcycle shop. One X45 lock will go on the employee entrance to the shop; the other will go on the door of his parts room. Gallant will run the software on the PC in his office.

Gallant has eight employees: six hourly workers, a supervisor and an office manager. His business is open from 8:30 a.m. to 5 p.m. Monday through Saturday. Here's how he's decided to set things up:

Gallant could set up the locks before they are mounted on the doors, but decides that for the the sake of convenience he'll wait until after they are installed. With the locks in place, Gallant installs the iButton Receptor and lock software on his PC, as described in the user manual.

Following the instructions in the user manual, Gallant first sets up his iButtons. He uses the AccessPilot software to assign iButtons to himself, his office manager, the supervisor and the six employees. Then he creates two time shifts:

Then Gallant assigns the "Managers" shift to the office manager and the supervisor, and the "Employees" shift to the six hourly employees. He does not assign a shift to himself, because he will retain around-the-clock access. He also sets the lock to Storehouse mode and sets the time on the lock.

Finally, he transfers everything he has set up in the software to the Program iButton and touches the iButton to each lock. The two locks accept the instructions. He hands out the iButtons to the managers and employees, completing the entire lock setup process. In just a few minutes, he's made his facility more secure and simplified his security responsibilities.