TimePilot created its AccessPilot software to give you absolute control over the CrossOver X45. Using the software, you can:

The software comes as a part of our Lock Management Kit. Only one kit is necessary to use all the features of our CrossOver Locks, no matter how many locks you own. The software is simple to use and comes with an illustrated manual. Click here to see a copy of the manual in Adobe Acrobat (PDF) format. You can also view and download CrossOver lock installation templates by clicking here.

The software's main screen (above) lists users down the left side and the locks on the right. To get more information about a user or a lock, just double-click it. When you double-click a lock, the Lock Properties screen appears (shown below).

In this screenshot, you can see the name of the lock and its location at the top of the screen. At the bottom is a list of all users. The dot in the first column indicates that a user's iButton will operate a lock. Want to give another user permission? Just click the empty space next to their name to make the dot appear and transfer the change to the lock. Want to delete permission? Just click the dot to remove it and transfer the changes.

You can see that four of the six users have been given permission to operate the lock. The screen shows that:

Each lock keeps a list of who tapped their iButton to it (whether they had permission or not) and when. Supervisors can download that list, called an audit trail, whenever necessary. Below is a sample: 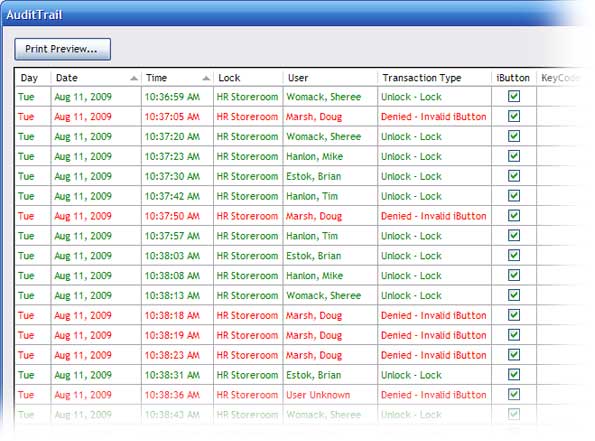 This audit trail, from a lock called "HR Storeroom," shows the times an iButton was tapped to the lock on August 11, 2009. According to the first line, Sheree Womack tapped her iButton to the lock at 10:36:59 a.m., the lock unlocked and then re-locked itself. Successful operations are displayed in green.

Six seconds later, Doug Marsh tapped his iButton to the lock. He did not have permission to operate the lock, so it denied him access. The unsuccessful operation is displayed in red.

At the bottom of the screenshot, at 10:38:36 a.m., someone tried to access the lock and was denied. It is listed as "User Unknown" because the person's iButton is not listed in the AccessPilot database as a user.