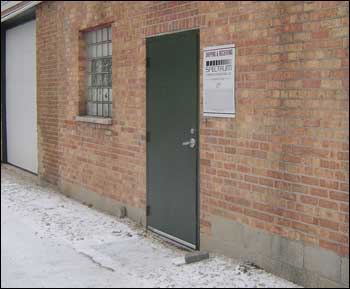 The scene of the crime. The CrossOver lock in the photo has been replaced in TimePilot's product line by the more advanced CrossOver X45).

After a storeroom break-in, police were stumped. Then the building manager realized the CrossOver lock on the building’s back door held the secret that could solve the crime. What happened next?

The man stood in the shadows at the back of the old brick building. There was no one else in the alley; the darkened parking lot nearby was empty. Not surprising, because it was 3 in the morning and the man—who worked for the building’s cleaning service—was many hours past his quitting time.

He pulled out his keychain and tapped his iButton to the green light on the lock on the back door. The lock beeped as it unlocked. He pulled open the green steel door, stepped into the dark corridor and closed the door softly behind him.

From a storeroom, he gathered up some welding equipment and carried it to his truck. Five minutes after he started, he was gone.

The theft was discovered the next day. Police were stumped, because there was no evidence of a break-in. Then the building manager realized the CrossOver lock on the back door held the secret that could solve the crime.

CrossOver locks record who used the lock and when they used it. It took just a few moments to download the lock’s usage into the lock software on her PC, and from there it was obvious: Why would a member of the cleaning crew enter the building at 3 a.m.?

When confronted with the evidence and asked why he had been in the building at 3 a.m., the man confessed and returned the stolen items.

The building manager had been testing the lock to see if it fit her needs. After learning more about the software, she found she could have avoided the problem by programming the lock to recognize the cleaning crew’s iButtons only during the hours they were supposed to be in the building,. If that had been done, the man’s iButton would not have worked at 3 a.m.

The building manager was impressed with the locks, and installed them on each tenant’s office in the building.

They’ve provided even more benefits than she expected:

Learn more about CrossOver Locks, the smart, simple
and secure choice for your facility.